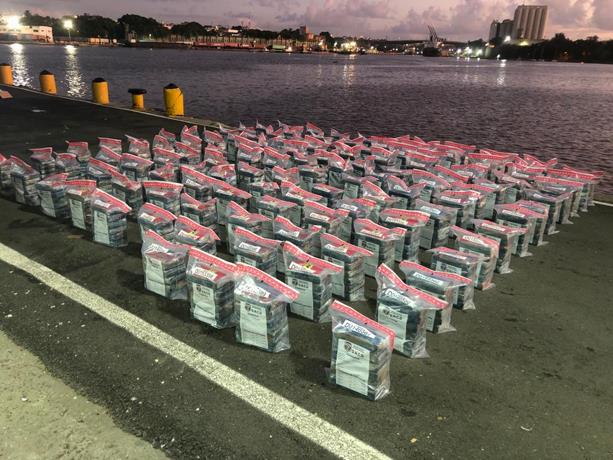 Drug confiscated in a joint operation where eight were arrested and 1,402 packages of cocaine were seized.

The anti-narcotics agents sighted the occupants of a boat several nautical miles south of the province of San Pedro de Macorís and, later, after inspecting the boat of about 25 feet in length, 23 bales containing the amount of 659 packages were seized according to intelligence reports.

In the operation, which was carried out with the support of the Dominican Republic Navy, the Air Force, and State intelligence agencies, and under the coordination of the Public Ministry, by air, sea, and land, four men were arrested (two Dominicans, a Colombian and a Venezuelan).

In the joint maneuver, which lasted just over 16 hours, two outboard motors of 75 Hp each, nine jugs of fuel, and a nine-millimeter caliber pistol with several capsules, among other evidence, were also seized.

Later, in a second operation, the DNCD, the Navy, and the Air Force began a process to interdict the occupants of a speedboat (Go fast type) to the south of Santo Domingo, where after several hours of persecution, they managed to intercept the boat.

Once the 35-foot-long boat was boarded, four Venezuelans were arrested, and 25 bags with 743 packages were seized inside, which were presumed to be cocaine, two outboard motors of 115 Hp each, three jugs, and eleven tanks.

“The seizure of these 1.4-ton caches is the result of the DNCD’s broad and close cooperation with the Navy, Air Force, Army, Police, State Intelligence agencies, and the Attorney General’s Office,” notes the press release.

The Public Ministry and the DNCD are trying to establish if the cases are related, while there are reports that both vessels would have reached Dominican coasts from South America.

The 1,402 packages seized separately in San Pedro and Santo Domingo were sent under chain of custody to the National Institute of Forensic Sciences (Inacif), which will determine the exact type and weight of the substance.

Colombia is working overtime sending drugs to the region.