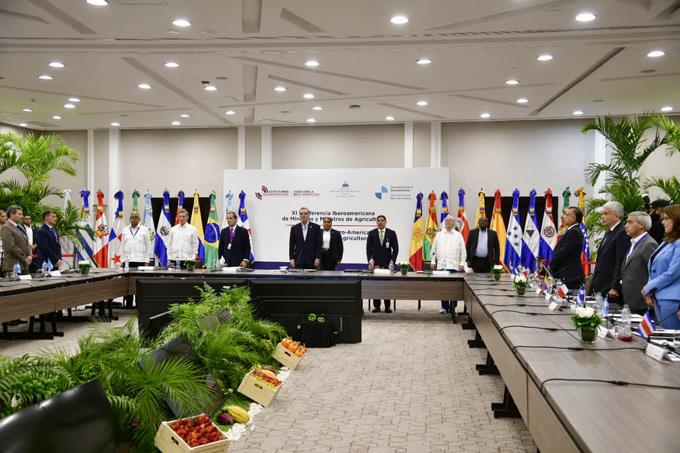 President Luis Abinader and the Ibero-American Secretary General, Andrés Allamad, expressed their concern this Wednesday about the challenges facing food production in the region.

“Precisely, that is what we are experiencing on a global scale: a crisis in food systems resulting from the high costs of agricultural production inputs such as fertilizers, energy and transportation. In addition to the prices of basic grains such as soybeans and corn, on which the production of animal protein depends, whose main source is meat and milk,” said the president.

The statements were offered during his speech during the opening of the XI Ibero-American Conference of Ministers of Agriculture that make up 22 countries that take place from today, Wednesday 27, until tomorrow, Thursday.

For his part, Allamad said that the Ukraine-Russia war had generated shock waves that impacted all of Ibero -America and will continue to be felt for a while because not only are both nations the third most prominent exporters of cereals in the world, but Russia is also the first exporter of nitrogen-based fertilizers and the second-largest exporter of potassium-based fertilizers.

To mitigate the situation, the president proposed to the members of the Summit of Ministers of Agriculture the creation of a permanent consultation mechanism that allows countries to identify the presence of technical barriers that hinder trade in agricultural goods between our countries.

In addition to coordinating the exchange of agricultural technologies and, when possible, carrying out joint plans to generate agricultural research, execute scholarship programs for the training of agricultural specialists and the sale of knowledge.

Also, organize technical events that allow knowing the advances in specialized and scientific areas of agriculture; execute joint programs for the development and application of environmentally friendly technologies that lead to the decarbonization of agriculture.

Similarly, advocating before international financial organizations for channeling resources to the sector under different conditions from those of other sectors in terms of rates and terms and the creation of a fertilizer price stabilization fund so that the States can resort to said fund to avoid transferring it to the farmer.

For two days, officials will discuss food security and nutrition issues, sustainable production, resilience and agroecology, the challenge of international trade in the agri-food sector in the face of the supply chain crisis, and the digital transformation of the agri-food system and family farming.

This meeting is part of the calendar of activities carried out by the country within the framework of the Pro Tempore Secretariat held by this international organization and the results of which will be taken to the XXVIII Ibero-American Summit of Heads of State and Government to be held in our territory under the motto “Together for a fair and sustainable Ibero-America.”