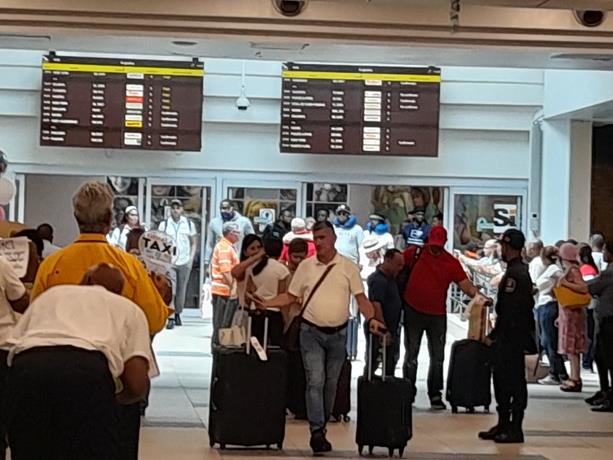 Santo Domingo, DR
The flow of passengers from abroad to the Dominican Republic increased at the International Airport of the Americas, José Francisco Peña Gómez, on the eve of the celebration of Mother’s Day on Sunday, May 29.

Commercial flights from the United States and other destinations touched the runway of the International Airport of the Americas, full of passengers coming back to the country to celebrate the date with their Mother on her day.

To flatter their Mother on her day, travelers come with large boxes of gifts such as televisions, stoves, refrigerators, stereos, and suitcases of clothes, among other special gifts.

In the Customs and Immigration halls of the airport terminal, there were long lines of passengers checking their documents and looking for their luggage.

The Immigration and Customs personnel quickly dispatched them after removing their suitcases and boxes from the luggage area with the gifts for their loved ones.

According to history, Mother’s Day was officially established by law in the Dominican Republic on May 30, 1926, during the government of General Horacio Vásquez. It was celebrated for the first time then.

The promoters of this important celebration were the Santiago educator Ercilia Pepín and Mrs. Trina de Moya, wife of the then-President, and composer of the Hymn to the Mother, which exalts “Her tenderness and eagerness, and her noble attribute of abnegation.”

Even though Mother’s Day is celebrated in the United States before the Dominican Republic, thousands of nationals travel to the country every year to spend this special day with their Mother, celebrated on the last Sunday of May.