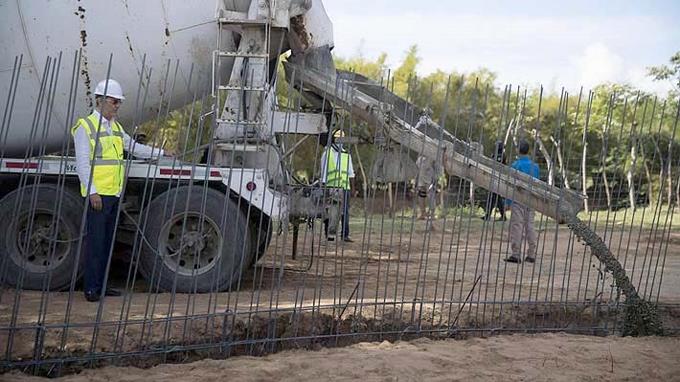 The engineer Antonio Parra said that the intelligent part of the wall would come later,” which consists of drones, night surveillance, and other security.

Construction work on the first stage of the border wall between Haiti and the Dominican Republic is progressing rapidly, with the majority being Haitian workers, who have legal documentation according to those responsible for the work.

The engineer Antonio Parra, responsible for the work, stated that the concrete structure is very advanced, then a cyclonic fence will be erected, and then trench wire. He said that “the intelligent part of the wall will come later,” consisting of drones, night surveillance, and other security.

Listin Diario journalists verified during a tour of the area that the work is progressing rapidly, although yesterday they were not working. One of the project supervisors clarified that they decided to give the workers a day off to share with their parents and other relatives because it was Mother’s Day.

However, including middle-level officials, Haitians said that just as the Dominican Republic builds a wall, the Haitian authorities also have the right to channel the Masacre River, in the Pierrer locality, between Fort Liberté and Cape Hitiano. “The Dominican Republic is building a border wall and when Haiti wanted to channel the waters of the Masacre River they made a scandal,” said former Haitian councilor Ondenlenne Baptiste.

I don’t understand the government, we’re building a wall yet employ more foreign labors to do the work. This is suppose to be a job that should employ more native Dominicans.

LOL. That is funny. Well Dominican People hard those kind of cement work. That is why 100% of the house in the Dominican Republic. Who do you think that build them?

90% or more of the people in all border towns are Haitians.

What ever happened to the 80/20 rule? Government almost always is the first rule breaker. Most people familiar with the workings of the RD know heavy labor is assigned to Haitians because they work cheaper. Dominicans shy away from it because of the low pay and the tiring long labor. There are exceptions, but we have not noted any recent protests from Dominicans about the majority Haitian labor at the wall.

The passage are only closed for illegal trafficking, people can go back and forth through the custom and immigration checkpoint locations.

According to a report in the Listin Diario of May 30 there are only three Haitians working on the border fence. It was to clarify an earlier report saying the majority of the workers were Haitian. The consortium in charge of the construction said there are 107 workers, of which are 100 Dominicans, 3 Peruvians, 3 Haitians, and 1 Venezuelan.

Don’t know what to think about this. Could it be the original report was based upon an assumption dark skin Dominican workers were Haitian, that the reporter did not dig enough to obtain facts?

This conflicting of information only leads to more questions needing to be asked. Don’t think there are only 107 workers on a project this big.

We all know that since the DR govt has signed themselves over to the powers of the U.S that the U.S is the one who is heading the wall project and paid for this project. Hence the whole ‘At The U.S boarder’ where the U.S would not allow the Haitians in 🤷🏽‍♀️ Do the math yall! The U.S is also going to send all Haitian born or not home to Haiti! I saw it! 😳Wait and see!

You must be one of those ignorant, unlearned, miseducated Dominicans. Stop making Dominicans look bad with your foolish comments. I’m from the United States, and one thing I’ve noticed is how Dominicans consider themselves more superior than Haitians. Let me remind you that you were conquered, oppressed and ruled by Spaniards just as the Haitians were enslaved by the French. The Haitians fought and revolted, and their bravery spark the idea of revolutionism throughout the Americas. Haiti was a GREAT country in the beginning. You Dominicans are imitating America. All of your laws are after the United States. Heck, the United States built a wall now you guys are building a wall. Now, as an independent country, you do have the right to build your wall, but remember as long as this earth exists, you’ll ALWAYS have your Haitian neighbors whom much of your trades and economy is dependent upon. The Haitians are going through hell right now. Stop letting journalists, the media propaganda and your government create more conflicts between you and the Haitians. You guys should be like brothers. How can te whole territory belongs to the Dominican Republic when you won your independence from Haiti?

Well you should tell the Haitians to set by example and show the pride of their heritage instead of denying it at every opportunity.
Tell the Elite class of Haiti Wich are mostly libanese to create more working opportunity for their people instead of creating a poor working condition paying miserable salaries forcing the people to migrate as an escape valve to the pressure while they benefit from selling their cheap made good at a high price because of the remittance of the diaspora. Profiting from the misery of the black hatians and making they believe that everyone else is responsible for their problems.
I did grow up amount hatians we went to school together we are brothers,friends forever.
More than 30% of my country population are either hatians or of hatian descendants.
So I think you should apply your on advise about the media

Mr.Pina, you forget your history, there was a time when Quiskeya (Rep Dom) looked to Haití for the light. Recall your Malecón in Santo Domingo, is a copy of Haiti Carrefour/L’artisanat bord de Mer

It says it all, unfortunately, Haiti has regressed greatly in the past 30 yrs, it’s ignorant mass. In majority with EXCESSIVE corrupt politics. To have the reality it has today.

Well done! Finally something good from this president

Walls do not stop criiminals. All that wall money should be used for the crumbling infrastructuon and for attracting new employers and business to the island. AND it would help if the government would actually create and ENFORCE some laws like civilized countries. But no…remain a 3rd world puppet of the United States!

You just want paralysis. With that excuse we will never build the wall which will delineate the boundary that was only marked by small pyramids!

People who try to discredit our democratically elected president do not deserve to be called citizens but rather opportunists who do not respect the free choice of us Dominicans to change the course of our nation. Hugo Borda Objío, M.D

It would be beautiful if two countries sharing an island would help each other instead of building walls.

You have the right to use the water from the Dajabon river but you are not allowed to modify its flow strength, course, and quality.
If you dare to alter the Dajabon river and we will divert the river upstream and you will be denied (a lesson that you need to be taught!!!).
No more 1800’s where you did whatever you wanted from stealing land, contaminating water, and felling trees.