A cold and calculating killer fired at Orlando 13 times 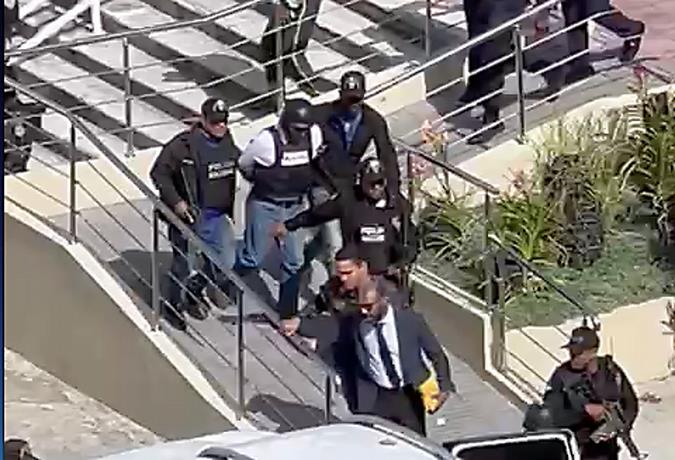 The murderer Miguel Cruz fired at Jorge Mera 13 times; six of the shots hit the official’s body in his ministry office

The prosecutors investigating the murder of the Minister of the Environment, Orlando Jorge Mera, point out that Miguel de Jesús Cruz de la Mota (a) Carandai went intending to kill his childhood friend, not having obtained the approval of environmental permits for the export of used batteries. In this case, the authorities are investigating the company Aurum Gavia, SA, given that the accused had original documents in his possession with which the permits were requested.

“The company had applied for a permit to export five thousand tons of used batteries, but the same had been rejected but had been reintroduced; the evidence shows that the accused had been trying to be granted multiple permits but complained angrily that “they did not solve anything for him,“ says a letter deposited in court yesterday afternoon.

The authorities request one year of preventive detention against the accused. The Permanent Attention Court of the National District will hear the request today at 9:00 in the morning.

The investigation indicates that the accused had threatened, less than a month ago, the Ministry’s legal consultant, Edilio Segundo Florián Santana.

Cruz de la Mota is being held in the preventive prison of the Ciudad Nueva Palace of Justice, awaiting transfer to court for the hearing.

The instance of coercion measure establishes that the murderer shot Jorge Mera 13 times; six of the shots hit the official’s body in his ministry office.

He maintains that Cruz, a few minutes after having entered into a conversation with Jorge Mera, without discussion, executed his plan to assassinate him with six distance and contact wounds.

The multiple shots fired at the Minister impacted different parts of the body, causing his death due to gunshot wounds to the head, face, anterior and posterior chest, and left hand, causing hemorrhage, contusion, and laceration of the brain mass, according to to the record of body removal No.61610 of the National Institute of Forensic Sciences (INACIF).

The accusation points out that this is a criminal act that shows the typical behavior of a cold and calculating murderer, and he shot him several times, an action that is the murder of an official for carrying out his work within the framework of the law.

He adduces the instance that the accused complained angrily that they did not solve anything for him. This situation caused him to threaten the Ministry’s legal consultant, Segundo Florián Santana, less than a month ago.

The criminal left on a motorcycle

After committing the crime, Cruz left the Ministry with a calmness typical of one who has materialized planned criminal conduct and, unable to get out in his vehicle, boards a motor vehicle near the Ministry and went to the Church of Jesus Christ High and Eternal Priest, of the Renaissance sector.

Before leaving the Ministry, the accused called his daughter Miguelina Alfonsina Cruz Gómez, but given the security measure, the young woman was prevented from leaving the facilities in her vehicle.

He closed the office to commit the crime.

In its request for a measure of coercion against Miguel Cruz for murdering Minister Orlando Jorge Mera, the Public Prosecutor’s Office determined that the member of security Nicolás Montero tried to open the door of the Minister’s office, but it was closed from the inside, so He proceeded to turn around to enter through another access door.

The murderer used this situation to leave the office by the stairs since he knew that this route was safer for his purposes of escaping from the crime scene.

Montero proceeded to enter the Minister’s office, finding the body lying on the floor and bloodied, and immediately informed the other members of the security by radio to arrest the accused, but amid all the confusion and despair that was created and before obvious security flaws, before and after the fact, the defendant went unnoticed in the crowd, managing to escape from inside the Ministry of the Environment.

According to the accusation, the easy access to the Minister was a weak point for his security, an issue that people close to him had warned him about.

He points out that these people told him that he harmed his interests and that he could not continue with that work scheme in which even when he traveled to the country’s interior to visit, he did not like to travel with the security that those visits required.