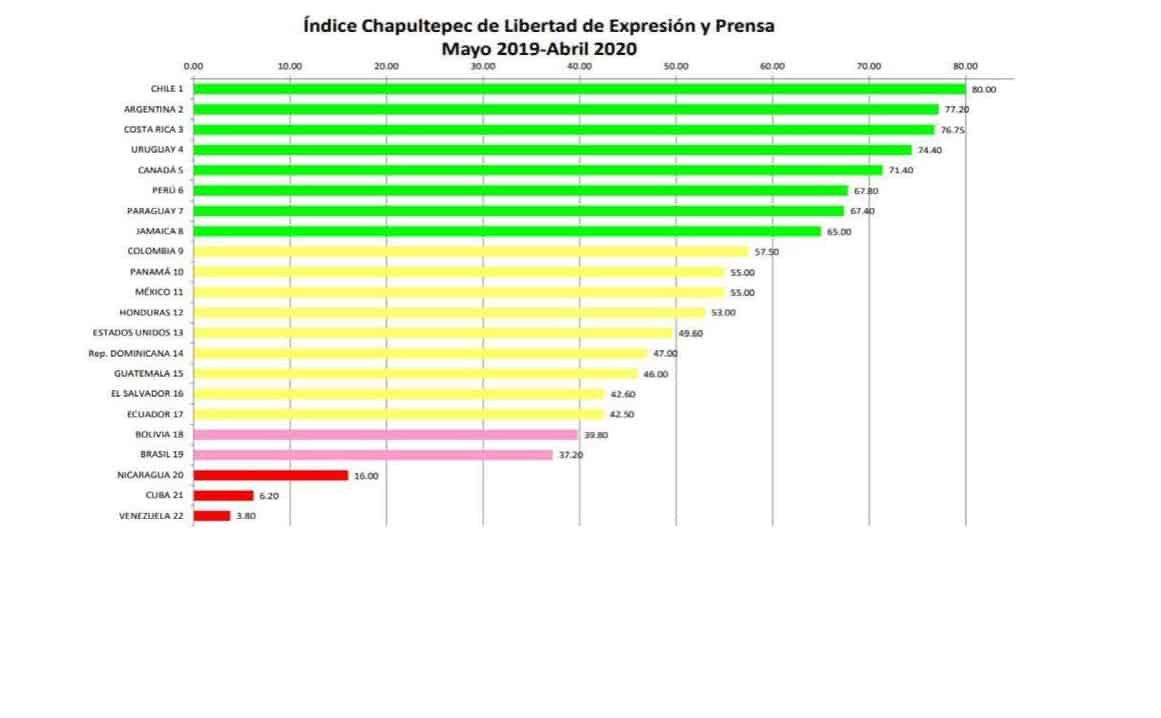 Santo Domingo.-The Inter-American Press Association (IAPA) presented this Tuesday the Chapultepec Index of Freedom of Expression and the Press, which shows how the Dominican Republic went, in the 2020-2021 period, to the fourth place of the nations in which a low restriction of freedom of expression is perceived, contrary to the measurement made for 2019-2020, when it was 14th place.
The IAPA’s annual barometer, which measures factors that positively and negatively influence press freedom in 22 countries, explains that the improvement of the Caribbean country is linked “to a change of government, after the presidential elections of August 2020, and consequent alterations in the legislative and judicial dynamics, captured by the experts consulted as favorable for freedom of expression and of the press.”
The measure is carried out based on four dimensions: “Informed citizenry with freedom of expression”; “Exercise of Journalism”; “Violence and Impunity” and “Media Control.”
In the first dimension, the Dominican Republic went from a classification of 11.6 in 2019 to 18.57 in 2021. It explains that in the first period there were “tensions caused by official propaganda, which included disinformation strategies and comments against critical journalists.”
It points out that in the second measurement a period was observed in which “after announcements by the new authorities in favor of the press and freedom of expression, the networks flowed with greater freedom, an aspect reflected in the non-imposition of measures against contrary positions.”

Don’t think the press can breath easy. There are those in the halls of Congress who want a gag law to constrain the press. A law that would require the media to submit material about people for its examination. Censorship at its worst.

So you have free press, then how come your census never show the number of undocumented people in DR? Or publish you foreign and total debt? Or how many people have firearms? What is the extend of the contraband in DR on a yearly basis? And you never question the role democracy play in nucleating, enabling, and even fostering most of the antisocial acts, unplanned demographic explosions, and environmental destruction the country suffer. Why???