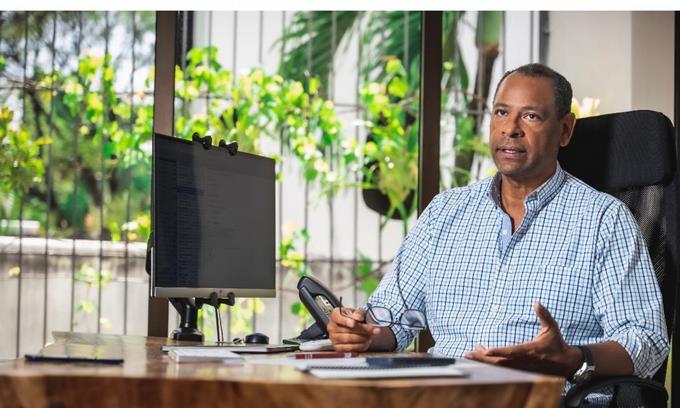 The Ministry of the Presidency, in coordination with the Administrator of Social Subsidies (ADESS) and the National Institute of Transit and Land Transportation (INTRANT), launched the new social protection program for motorized carriers, MOTO-BENEFICIO (MOTOBEN), to improve the quality of life of hundreds of families that depend on the income that these men and women contribute every day.

The director of the Ozama-Metropolitan region ofINTRANT’ss motorcycle area, Margarita Rodríguez, coordinator of the program, explained that it begins with a pilot plan in Greater Santo Domingo, under the slogan” Formalizing with the State gives me quality of life,” benefiting 5,000 properly organized motoconchistas; which have been registered at their stops, with their helmets labeled and after having received induction in” correct driving practice” by the INTRANT Road Education School.

Dozens of motoconchistas stops grouped in associations, unions, and federations were summoned to the Los Billeteros Club, in the Los Tres Brazos sector of the Santo Domingo Este municipality, where the ADESS delivered a social subsidy card to each member, with which they will receive a subsidy of one thousand pesos (RD$ 1,000.00) for fuel every month and the Aliméntate subsidy, (RD$ 1,650.00) to obtain the products of the basic food basket.

The general director of the ADESS, Digna Reynoso, after weighing the multiple benefits identified by President Luis Abinader for this sector, indicated that a schedule was designed to deliver 400 daily cards to the same number of participants until culminating in the provision of the 5,000 plastics to motorized transport workers in the neighborhoods that make up Greater Santo Domingo, in a first stage.” Of the 5,000 Motoconchistas who will benefit through MOTOBEN, 2,130 already receive the feed subsidy, and the remaining 2,870 will be included as part of the 300,000 new beneficiaries ordered by our president, a decision that expands social coverage for the benefit of thousands of families that only had poverty as an all”, said the head of the ADESS.

Margarita Rodríguez pointed out that, in addition to providing social protection to this vulnerable sector, the purpose of the program is to prepare them to integrate into Dominican society as the productive entities they represent,” since each motoconchista is a microenterprise and as such, they have the duty, not only to contribute to the economy of their communities but also the organization and cleaning up of the.”

The executive director of the Transport Cabinet, Hugo Beras, spoke at the event, representing Minister Lissandro Macarrulla; Wailly Lewis, Director of Operations for the Supérate program; the head of PROMIPYME, Porfirio Peralta; the Mayor of the Santo Domingo Este municipality, Manuel Jiménez and Gustavo Ureña, leader of the motoconchista sector. Similarly, the event was attended by the head of ADESS Operations, Zoila Turbí, and Vicmari Acosta, Coordinator of the Social Supply Network (RAS), among other public servants.

Are there any rewards for automobile owners for wearing seat belts, keeping their vehicles in good condition, and having all necessary documents?