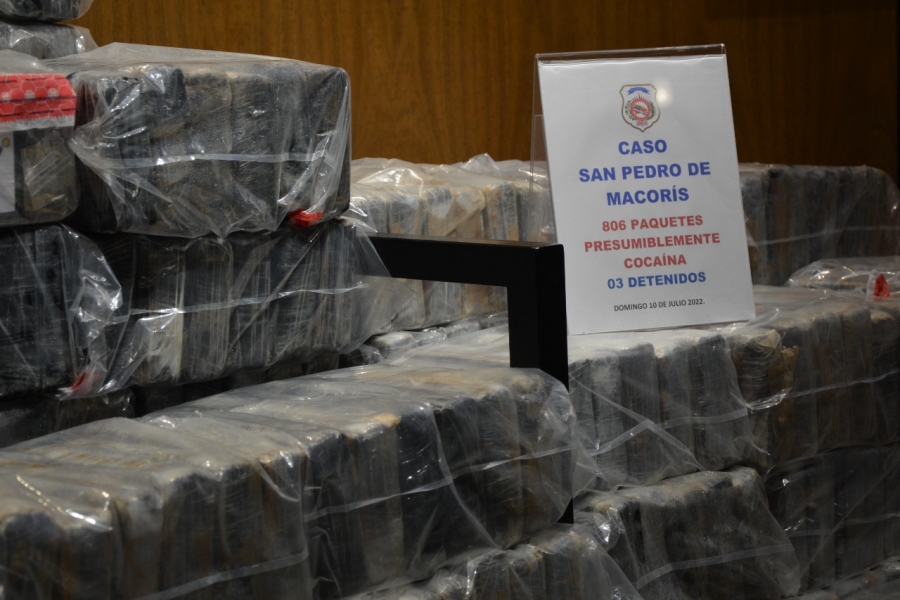 Santo Domingo.- In a joint interdiction operation, by air, sea, and land, which lasted just over 15 hours, the National Drug Control Directorate (DNCD), members of the Dominican Republic Navy, the Air Force, of State intelligence, and members of the Public Ministry, confiscated 806 packages presumably cocaine in San Pedro de Macorís.

The authorities, after receiving an alert from intelligence agencies, activated the tactical and reaction teams and began a follow-up and pursuit operation against several individuals on board a speedboat (Edwardian type), who intended to introduce an undetermined amount of controlled substances to Dominican territory.

Several hours after the operation began, the naval and air units managed to intercept, several nautical miles south of the coast of San Pedro de Macorís, a 27-foot long vessel, where they arrested three Dominicans and occupied 28 bales. containing the 806 packages of a substance presumed to be cocaine.

It should be noted that the bales were heated inside the boat (tank modality) on the benches at the back, as a way to avoid being discovered by the pursuing units.

The blue and white boat, without registration or name, with two outboard motors of 100 horsepower each, would have arrived on the Dominican coast from South America.

In the intervention, a satellite phone, several fuel jugs, life jackets, water, and groceries, among other evidence, were also seized.

The Dominican authorities, as a result of synergy and inter-institutional cooperation, have continued to deal heavy blows to national and international drug trafficking, managing to seize 19,747 kilograms (19.7 tons) of different drugs so far this year.

The 806 packages seized in this new operation are being sent, under chain of custody, to the National Institute of Forensic Sciences (INACIF) to determine the exact type and weight of the substance.

This is why I support this administration.

It is very likely the 27′ boat was tracked from S.America. A boat of this size on the open waters of the Caribbean probably brought attention to it, probably because it fit profiles of illegal trafficking behaviors. Kudos to the government for this capture.