Dust from Sahara spreads in the country; while trough and tropical wave cause rains 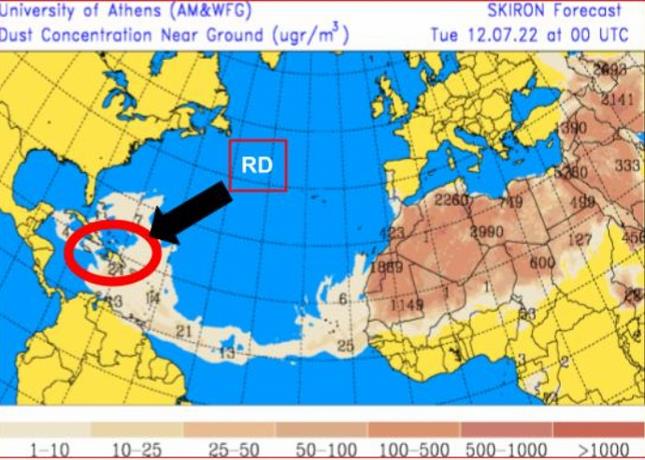 The heat will be more suffocating and the particles of the Saharan dust affect the respiratory system and sight.

The National Meteorology Office (Onamet) warned citizens that starting tomorrow, Tuesday, considerable dust particles will arrive from the Sahara, which will make the thermal sensation hotter and the sky will appear grayish with an opaque appearance.

While for today the meteorological environment will be marked by weak to moderate rains, due to the incidence of a trough and a tropical wave.

“During the morning hours, weak to moderate rains will be generated, with isolated thunderstorms and gusts of wind over the towns of La Romana, San Pedro de Macorís, and Santo Domingo, among other locations. As for the afternoon, these precipitations will be spreading with greater intensity towards the northwest, southwest, and the Central Mountain Range, due to the incidence of the trough and the arrival of a tropical wave,” says the report.

For tomorrow, Tuesday, despite the fact that the tropical wave will move away, the trough will dominate the weather conditions, maintaining a fairly unstable environment, therefore, some local downpours with electrical storms and gusts of wind will be generated, especially in the hours of the afternoon, over the southeast, southwest, northwest and other points of the Cordillera Central.

For this Monday the temperatures will reach 36 degrees in different provinces of the country, but with the approach of the Saharan dust on Tuesday, the heat would be more suffocating. “The concentration of Saharan dust particles today in the Dominican Republic will range between 15 and 25 microns/mt3.”

Faced with this situation, Onamet recommends taking measures, and this can cause respiratory problems and eye allergies.

“Temperatures will remain hot, due to the time of year (summer) and the east/southeast wind, it is recommended to wear light clothing in light colors, drink enough fluids and avoid exposure to the sun without proper protection during normal hours. from 11:00 a.m. to 5:00 p.m. Starting tomorrow afternoon.”

In Greater Sano Domingo there will be cloudy increases with weak to moderate rains and possible thunderstorms, before noon. The maximum temperature is between 32?°C and 35?°C and the minimum is between 23?°C and 25?°C.