Santiago: For the second time protest in front of Edenorte for electricity rate hike 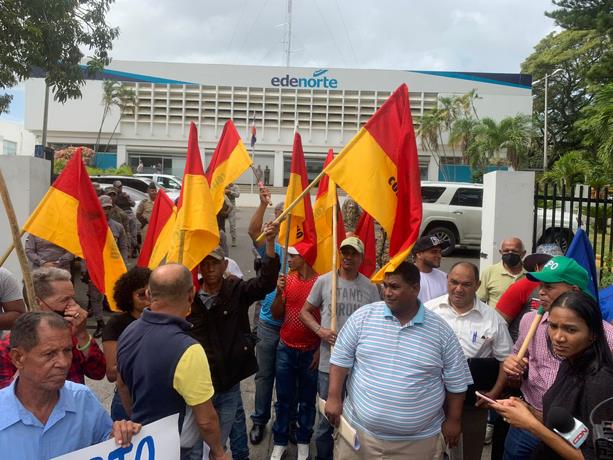 Santiago, DR
Several organizations of Santiago protested this Wednesday in front of the building of the Empresa Distribuidora de Electricidad del Norte (Edenorte) against the increase in the energy tariff.

The protesters complained about the high billing in the last two months and said they had seen an increase ranging from 100% to 300% in their bill.

One of the protesters is Ana Rosa Medrano, who came from the Hato del Yaque sector in the southern zone of Santiago to show her dissatisfaction with the increase in her bill.

According to Ana Rosa, before the increase, she was paying around 653 pesos, and now she received her bill for RD$1,718, an amount she says she cannot afford since she is a person with limited resources.

Meanwhile, Osvaldo Brito, general coordinator of the coalition, announced a strike in the 14 provinces of the Cibao due to the high electricity bill.

“The Dominican people are going through one of the worst crises in their history, as a result of the COVID-19 pandemic and the Russia-Ukraine war, and this Edenorte situation generated by the Government is making life more complicated for Dominicans,” said the popular leader.

The demonstrators blocked the road momentarily, an action controlled by the National Police agents who were guarding the strike.

José Mercado, leader of the coalition, also announced a protest for August 8 and 29 in the whole region.

It will remain the same.

This protest occurred days after the President of the Republic, Luis Abinader, informed that the Government had determined “to stop future increases in electricity rates until the economic circumstances in the Dominican Republic change.”

This was made possible through Resolution SIE-068-2022-TF, with the Superintendency of Electricity (SIE) announcing that it would modify the previous provision, which established the transition tariffs for the July-September 2022 quarter, leaving them without effect.

“After issuing Resolution No. SIE-061-2022-TF, this Superintendency has verified that the current extraordinary conditions of the world situation, has generated an excessive increase in fuel prices, indispensable inputs for the thermal generation of our energy matrix, which impact the cost of electricity generation; the supply process of the Electric Distribution Companies and the tariff calculation,” the SIE stated in the document above.