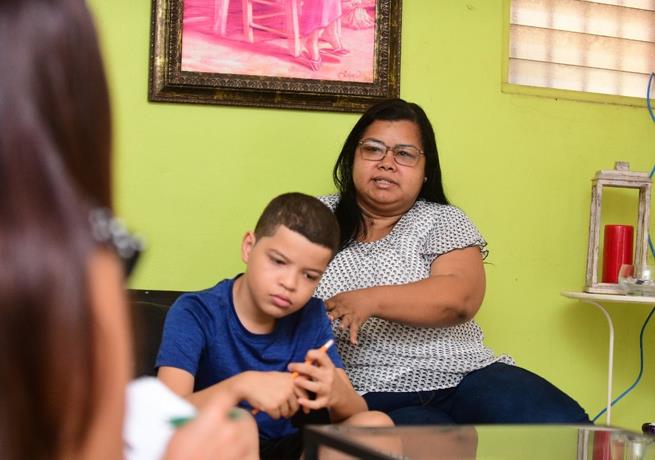 Dayana and Edras Villa, accompanied by their son, Saúl, 12 years old, with type 1 diabetes, speak with journalist Doris Pantaleón at their residence. / J. A. Maldonado

Santo Domingo, DR.
It has been almost a year since Dayana and Edras Villa’s life changed, not only emotionally but also in economic terms. The diagnosis of Saúl, 12 years old, of type I diabetes, made them aware of a reality they were unaware of until that moment.

The first thing was to begin to educate themselves about this condition and raise the child’s awareness so that he would accept his new reality; to make adjustments in his daily diet and, above all, in the financial budget to guarantee the insulin treatment, vitamins and other supplies he needs for his control.

The family lives in the Residencial Ciudad Satélite on the Duarte highway and economically depends only on the father’s salary, who works in a private company. To help, Dayana had set up a cafeteria in a space in the house, but it went bankrupt with the Covid-19 pandemic, and they have not been able to reopen it.

As a continuous treatment, Saul uses two types of insulin, one of which he receives, sometimes with delays, through the Diabetes Medicine Program (PROMEDIA). The family buys the other, and he also has to purchase supplies such as strips, needles, lancets, stomach medicines, probiotics, and vitamins, which are not covered by medical insurance, in which they invest between 10 and 12 thousand pesos a month.

In addition, they must include whole foods, vegetables, and fruits in their daily diet. But unfortunately, the products’ costs prevent her from receiving the food and vitamin supplements with the rigorousness that the doctor recommended.

The family gave details to Listín Diario about their experiences to call attention to the cost of the medical treatment and food that a child with diabetes requires and the need for governmental support and assistance for their families.

Eight shots a day
To control his glucose levels, Saúl has to test himself eight times a day, once before and once after each meal, and others whenever he feels any discomfort, equivalent to eight pricks a day to take a blood sample.

That, said his mother, is what most distresses the child, so he longs to acquire some meters or sensors placed in the arm, which would allow him to reduce “the punctures” to one every 14 days.

She uses two types of insulin, one she takes once a day and the other three times a day.

At least 900 cases
Saul receives medical attention at the Robert Reid Cabral Children’s Hospital, where there is a record of 400 children with this condition; at the Arturo Grullón Children’s Hospital in Santiago, there is a similar record also at the Hugo Mendoza Hospital there are about 30 minors and at the Materno Infantil de los Mina, another 30, for about 900 in hospitals in the country, explains pediatrician Elbi Morba, who days ago denounced concern about the reduction of patients in the program of medicines for Diabetes (PROMEDIA).

Poor coverage and little support
In addition to Saul, who is in the third year of high school, the family has Brandol, nine years old. Dayana says that the child began losing weight in September last year, stopping eating, urinating a lot, and drinking water exaggeratedly, which forced him to get up several times at night and locate toilets wherever he moved.

After medical check-ups, he was diagnosed with type 1 diabetes, which emotionally affected them all, including the boy who in the first month felt ashamed that his condition was known, which he overcame later. Nowadays, Saul himself asked to be in the report’s photo because “he wants to be famous to make his condition known.”

The mother explains that she began to find her own way around because, in the country, there is little support for families, and the medical insurance coverage is limited to emergencies and hospitalization. Still, everything else is at the patient’s expense.

Insulin.
After Saul’s diagnosis, his parents were referred to the Reid Cabral hospital, where the child entered the Diabetes Medication Program (Promedia), who, he said, sometimes has difficulties in receiving insulin on time and who is recently attending the camp of the Aprendiendo a Vivir Foundation,” where they have learned a lot about the subject.