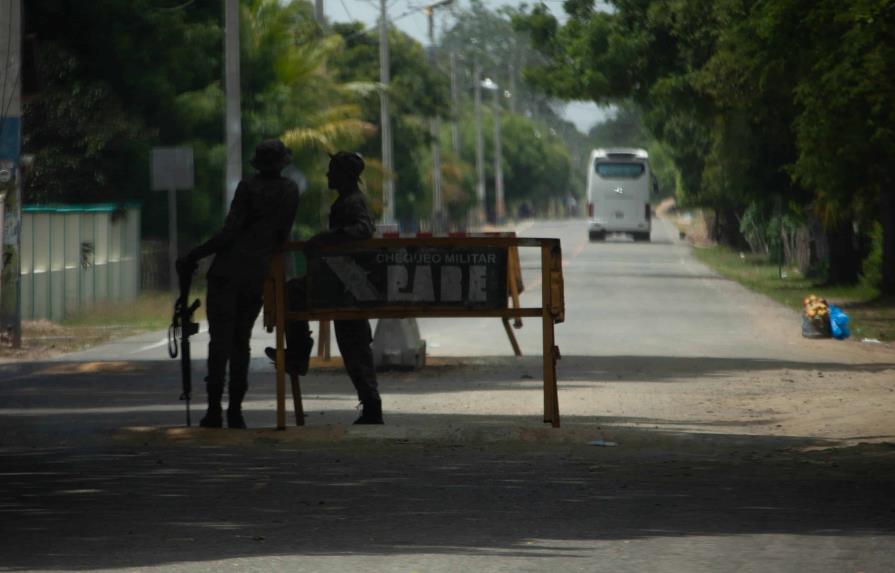 On a trip between the provinces of Pedernales and Barahona on the weekend of July 23 and 24, there were six military checkpoints where the agents carried out routine checks on the vehicles circulating in the area. On the road stretch between Pedernales-Barahona, there were three checkpoints, two less than five kilometers away between San Rafael and the city of Barahona. The third was on the seawall of Barahona.

In addition, a fourth one is at the exit of Barahona, after the María Montez airport, right at the welcome sign to the coastal municipality of Barahona. The fifth is where the Joint Interagency Task Force is located at the Vicente Noble crossroads, and the sixth is in Quita Coraza.

While it is true that the military attended to private vehicles with considerable agility, this was not the case with public vehicles such as passenger buses and cargo vehicles. It was noted that cargo vehicles were asked for documentation of what they were transporting, while passenger vehicles were inspected, which took longer.

These checks generated blockages at the points of the highway where there are only two lanes (both ways), which is virtually 95% of the Sanchez highway from the province of Peravia to the deep south. These were solved with greater agility in the centers where the Joint and Interagency Task Force points are mounted.

YOU MAY BE INTERESTED IN
Request to reduce the number of military checkpoints on the Northwest Line
According to unofficial information obtained by this media, there are military checkpoints that are in charge of the Army of the Dominican Republic, which are fixed. In contrast, others are movable and are placed in places according to the information coming from intelligence.

It was also indicated that the inspections of those who travel in the places of the checkpoints could be increased and intensified according to the instructions given by the military for security reasons.

Ricardo de los Santos, president of the Federación Nacional de Transporte Dominicano (Fenatrado), said that they have no objection to the posts because they are a matter of national security that “nobody” can oppose.

“Historically they have always been there and it is a matter of national security that no one can oppose,” commented De los Santos when consulted on the subject. Although not all vehicles are checked, emphasis is placed on passenger and cargo vehicles.

Request to reduce the number of military checkpoints on the Northwest Line
Antonio Marte, president of the National Confederation of Transportation Organizations (Conatra), said he supports the military checkpoints and the revisions made to detect arms trafficking, drugs, and undocumented persons.

“What we do disagree with a little is the number of police lying down (speed bumps) on the highways. But the military posts, those military checkpoints, we are in agreement,” reiterated Marte, senator of the Santiago Rodriguez province.

In addition to the checks in charge of the Army of the Dominican Republic, there are also inter-agency posts of security and border control, especially in the border sectors with Haiti.

At these points, officials from the general directorates of Customs, Migration, and National Police, the Public Prosecutor’s Office, Drug Control (DNCD), and the National Investigations Department (DNI).

As of 2018, the Ministry of Defense counted 78 checkpoints to control the land entry of foreigners into the Dominican Republic. However, in the investigation of this media titled Trafficking with Impunity, the then Minister of Defense, Ruben Paulino, defended that even on the same route, 11 checkpoints are in place.

I would have no problem if I was not treated like a criminal each time and then have the “official” suggest that If I left him a little something it would be better for both of us.

I have determined the best way for me is to greet the officials with a hello and smile and ask what is happening? Being pleasant most often gets me a pass. Being BS creates ill will. If they go so far as ask for something, I say I have little at the moment except for small change I need for tolls. If they get pushy, I ask for the man in charge and tell him my wife’s close cousin is a Senator. I posted his phone number in my cell. I get the wave on, no problem.

What they don’t mention is all the times these crimimals in uniform shake you down for a bribe. On my last drive from SD to Cabarete I was stopped 3 times, twice I was asked “Where were my drugs” and shook down for bribes. I was scared they would plant something. This is 3rd world treatment.

3
Reply
chupacabra
Reply to  Had Enough

welcome to our beautiful country… 😂😂😂…go to africa

Not a big issue! If you do not commit any crime it is just a 5 second stop and go on.
Enjoy my country!