East zone of the capital covered by garbage 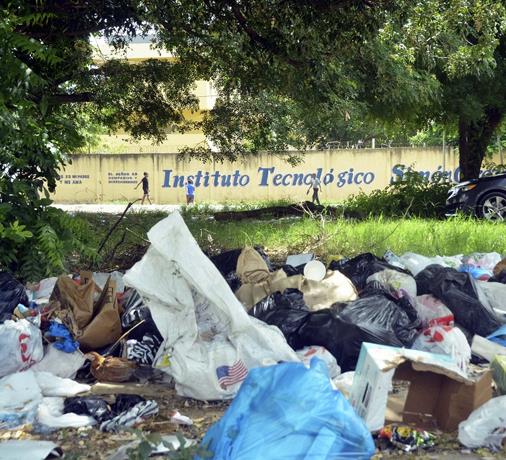 Garbage piles up in the avenues. Leonel Matos

Santo Domingo, DR
“Villa Duarte is drowning in garbage,” so say many of its residents, while the corners of the sector filled with solid waste back up their arguments.

Despite the fact that the Santo Domingo East City Hall is called upon to carry out a daily garbage collection in the neighborhoods, many claims that the garbage trucks pass twice or even only once a week.

In addition, when they do, the garbage collectors can see the garbage and continue on; a fact that was evident to journalists who were present when a garbage truck passed along 25 de Febrero Avenue, stopped at a garbage dump, and picked up only a part of the bags deposited there.

“We are going to take to the streets. Villa Duarte is going to go on strike because this cannot be possible, the truck passes along that avenue (25 de Febrero), but does not go into the streets of the neighborhood. We are serious,” expressed Nairobi Ozuna.

However, those who live in the same neighborhood, but on the back side of the busy avenue, say that thanks to the neighborhood council of their part of the neighborhood, which is maintained “on top of the City Hall,” the garbage trucks pass daily, even twice a day, despite the problems expressed by the drivers themselves which make it difficult for them to pass by the Duquesa landfill.

Ensanche Isabelita
In Ensanche Isabelita, the piles of garbage are separated by less than a meter, and its residents, when questioned about the reasons, allege that the route of the garbage trucks does not include the entrance to the streets where their residences are located.

“We have to dump the garbage here because the trucks do not enter. The garbage passes here when it wants to and it is on the main road so, since you don’t have a place to keep garbage in your house, you take it out here,” said Luisa, a resident, as she took the garbage out of her house and left it in one of the piles.

Those who live on the nearby Los Mameyes road (“Mamayeros”) are also desperate about the late passing of the garbage trucks.

“It takes three days for a truck to pass,” said Leidy Laura, who has a business selling empanadas in this sector of Santo Domingo East.

In Invivienda
The “do not litter” signs are painted and placed in vain in this part of Santo Domingo East.

Those who deposit their garbage bags in the piles say again that “they have nowhere to leave the garbage in their homes” and have caused it to litter the intersection between Invivienda and Villa Carmen.

“The truck sometimes passes by and continues on its way, and comes and picks up the garbage from a school that gives it a little money on the side, but in the others it stays right there,” said Isidro.

When the vertadero Duquesa has a problem all of Santo Domingo has a problem. What happened to all the caliche that was used to pave the access road a couple years ago? The problem is like always in the RD, preventative maintenance is a structure rarely used. Make a fix when it breaks. The result seems that nobody bothered to take care of the road, a road put under stress from many trucks every day. So now to get the mountains of garbage collected, fix the road.