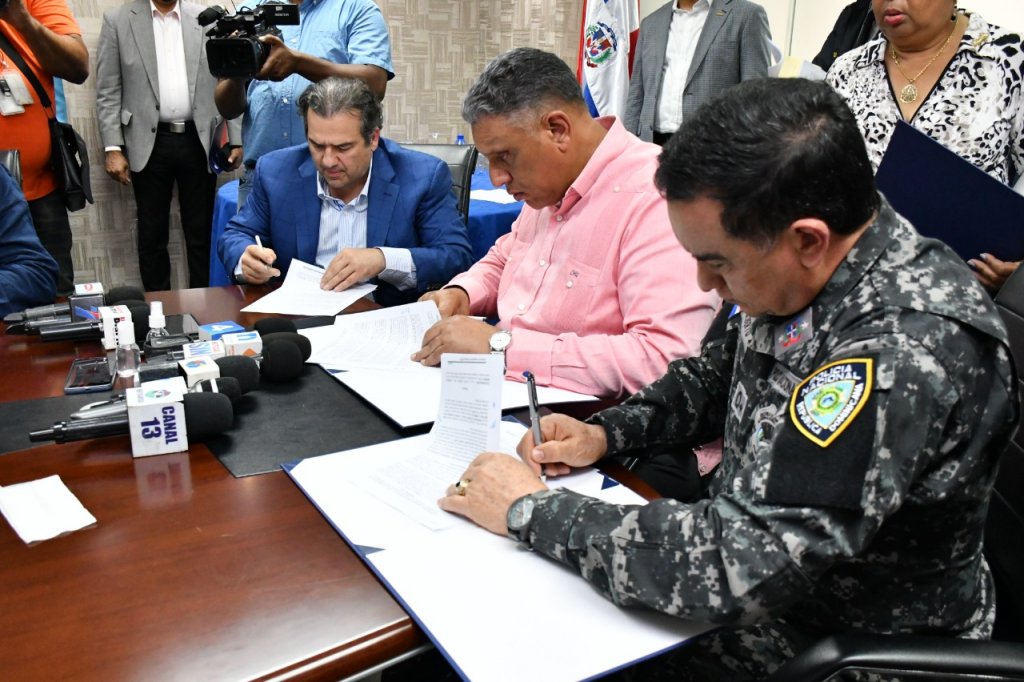 From September 1st, all members of the National Police will receive a discount of between 5 and 6 percent on purchasing products in supermarkets and stores of the companies of the Ramos Group, Plaza Lama, Híper Olé, and the Dominican Federation of Merchants (FDC).

A press release details that through the agreement signed by the Minister of the Interior, Jesus Vasquez Martinez, and the director of the Police, Major General Eduardo Alberto Then, on behalf of the authorities, and by the companies Pedro Lama, of Plaza Lama; Maria del Carmen Ramos, of Grupo Ramos, and Jose Manuel Rodriguez, of Supermercados Olé, and Ivan Garcia, president of the FDC, respectively, the parties jointly undertook to implement the cooperation agreement and support the fulfillment of the inter-institutional commitments assumed by each institution.

According to the document, the purpose is to offer all members of the police force, who are registered in the database provided by the National Police, a discount of between 5% and 6% indistinctly on the purchase of supermarket products and articles in stores from RD$1,000.00 and upwards in any of the commercial establishments, upon presentation of their police identification card.

Read also: Jesús Vásquez: police officers and family members will be able to study in universities free of charge.
Meanwhile, the Police committed to delivering a digital list with the personnel belonging to the institution’s data (names and ID numbers) to be used as a database by the signatory companies for the execution of the present agreement, as explained by Minister Vásquez Martínez.

“This database will be updated every 30 days with information related to the entry and exit of the members of the institution, so that no inconveniences arise when the police officers come in search of this important benefit,” said the official.

For their part, the businessmen welcomed the initiative that seeks to improve the quality of life of the agents and expressed their willingness to continue collaborating.

Pedro Lama described as impressive the work that the Ministry of the Interior and Police were doing in favor of the members of the uniformed forces and said that the group feels honored to be able to collaborate in the cause.

“For us at Grupo Ramos and the other companies that accompany us, it is an honor to be able to collaborate, and we are willing to support, you can always count on us,” she assured.

“On behalf of Grupo Olé and the chains accompanying us in this mission to improve the lives of police officers, we gladly accept our new responsibility,” said José Manuel Rodríguez.

Meanwhile, the leader of the merchants, Iván García, said that he has always supported the management of the Minister of the Interior and the director of the Police. He considered that the initiative represents an indirect salary increase for the agents who will be able to count, in principle, 200 of the 1,715 supermarkets that the federation groups in the country.

Other benefits for the policemen have been the salary increase, free lunch, sale of food at low cost by the Inespre in the police stations, and complimentary transportation by the Teleférico, the Metro, and the OMSA units.

Likewise, maximum insurance from Senasa, loans with the Banco de Reservas at preferential rates for the acquisition of houses, as well as for household appliances and vacations in the country’s hotels.

What is interesting is this action now makes discounts proper. Historically, officers would take discounts by personal persuasion.