Archaeological methodology expert Adolfo López heads a team of researchers trying to determine if the cemetery contains the remains of the island's first settlers, with the aim of recovering the memory of the first cultural groups that entered and settled in Hispaniola. jorge martinez/daily list 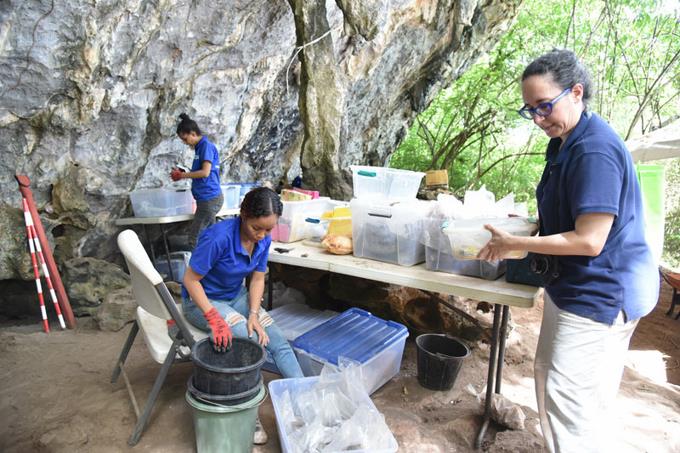 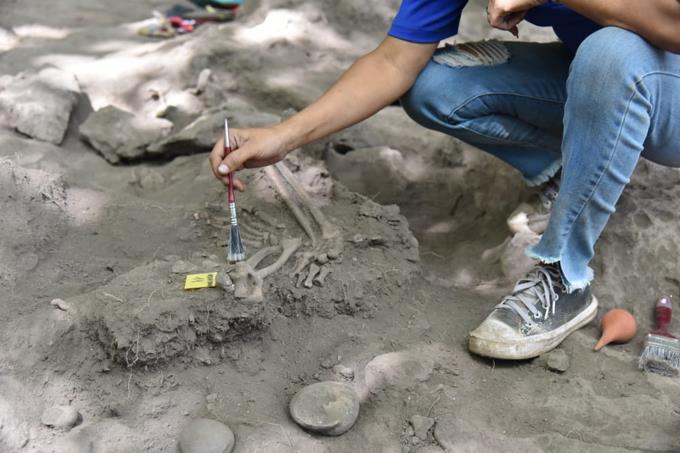 Samaná, DR
Skeletons of large fish, pieces for funerary rituals, cooking, gathering, and hunting tools, were other objects that the team of Dominican archeologists found in the Cabo Natural Monument, in the eastern zone of the Samaná peninsula, as well as human remains of children of what could be the first settlers of the island of Santo Domingo.

Archaeologist Adolfo López explained that using the Harris method, they found remains of large poydontes (marine snails) and fish, hammers, picks and rays of dry coral, caravels and triangles (representation of fertility) carved in stone, axes and flint tools (a mineral of great hardness used as a cutting tool) that could be from the archaic groups or other more ancient ones.

The Harris method consists of the study, through the superposition of strata or layers of the earth, in which each stratum or layer corresponds to a different age or period, which allows dating its antiquity.

“We have managed to find six very small children, four babies, which had never been found before, because the bones of children fall apart, so having the opportunity to study babies and small children from such an ancient period is a cultural event of the highest level,” said Lopez, an expert in archaeological methodology.

“There are newborn children who have not been born, and that tells us something very important about the society (…) That adults and children are buried in the same space means that those children meant a lot to the society,” added archaeologist Galvez.

The archaeological team hypothesizes that there was an infant mortality rate. “We believe that between two and four years old, at the moment of weaning or when they are born, they have many possibilities of death and like all prehistoric societies, by many types of problems, not only by current diseases,” said Galvez, a specialist in exhumation, specifying that it is not entirely proven and it is a hypothesis.

Lopez describes the “archaic people” as groups of fishermen and gatherers; hence large quantities of snails, shells, and fish have been found in the deposits. He specified that they would be analyzed to see if they coincide.

In addition, percussion hammers, grinders, and slabs made of stone were found. Lopez showed one of the hammers and pointed out the part where it had worn, precisely because of blows.

Galvez described that they have many individuals with dental wear, “which does not indicate that they have a diet based on the consumption of yucca, for example, then they crushed the yucca with the coral rays (tool) and all those stones that are released wear out the teeth.”

He specified that this is a hypothesis since, after the excavation phase, the bone pathologies of the unearthed individuals will be analyzed, and then comes a stage of analysis and discussion by the archaeological team.

Stone in the shape of a face

Likewise, the excavation team found other magical-religious elements that give even more indications of the archaic period, among them, stones carved in the shape of skulls.

“This flattened stone in the shape of a face with eyes and nose could have been one of the identifications of the site. It is a ritual-funerary piece, but it will be evaluated,” said Lopez.

Several stones in the shape of a triangle were other findings. “This triangle may represent the pubis or female womb… they have a connotation of fertility and it is also related to the moon and lunar cycles,” said the specialist in archaeological methodology.

The Archaic people were characterized by their stone artifacts. They produced instruments by flaking the stone to the desired shape and then polishing it, thus creating spears and various stone axes.

“We will be able to date these flint stones, to know what other materials they lived with, they give us a lot of information,” said López. The Cabo Natural Monument, in the eastern zone of Samaná, houses a new archeological site currently being studied.

Alienated people take to the streets

Military reinforcing the border through Pedernales

Natural gas is the new “Russian winter” as a war element…