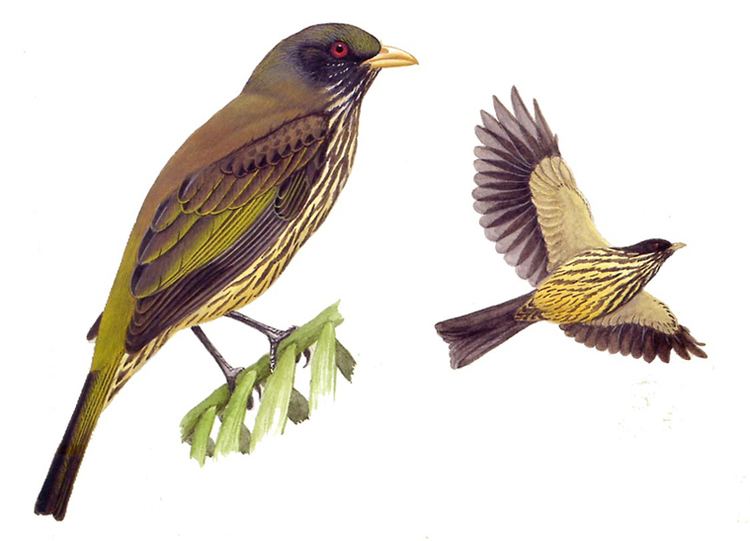 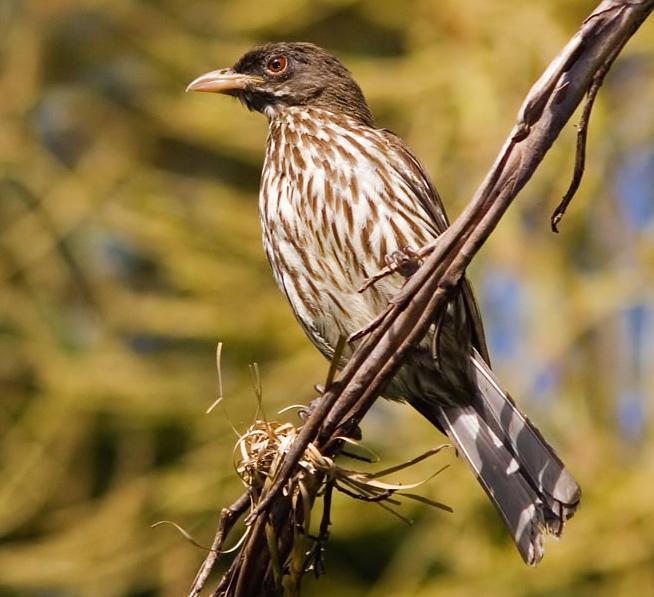 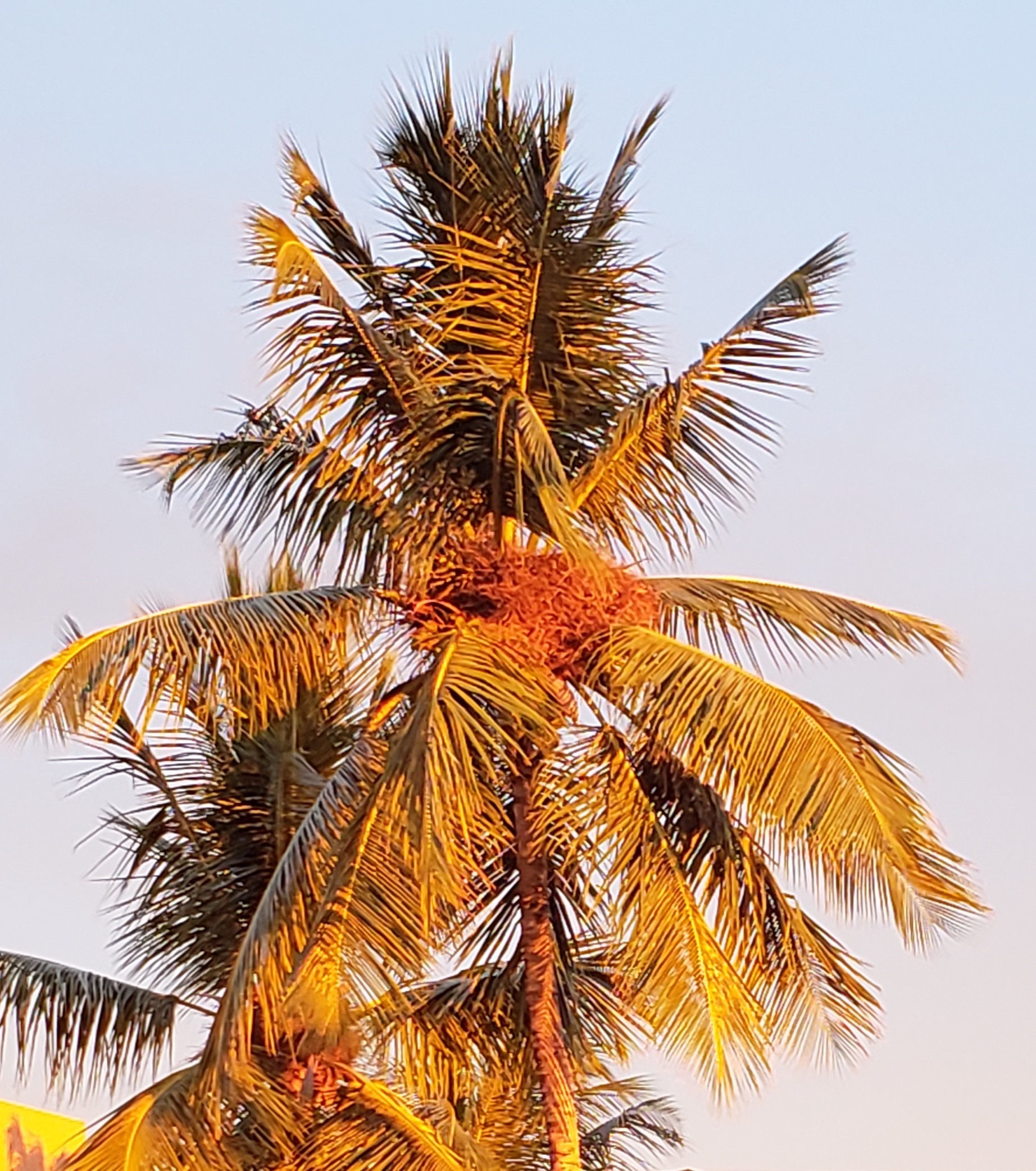 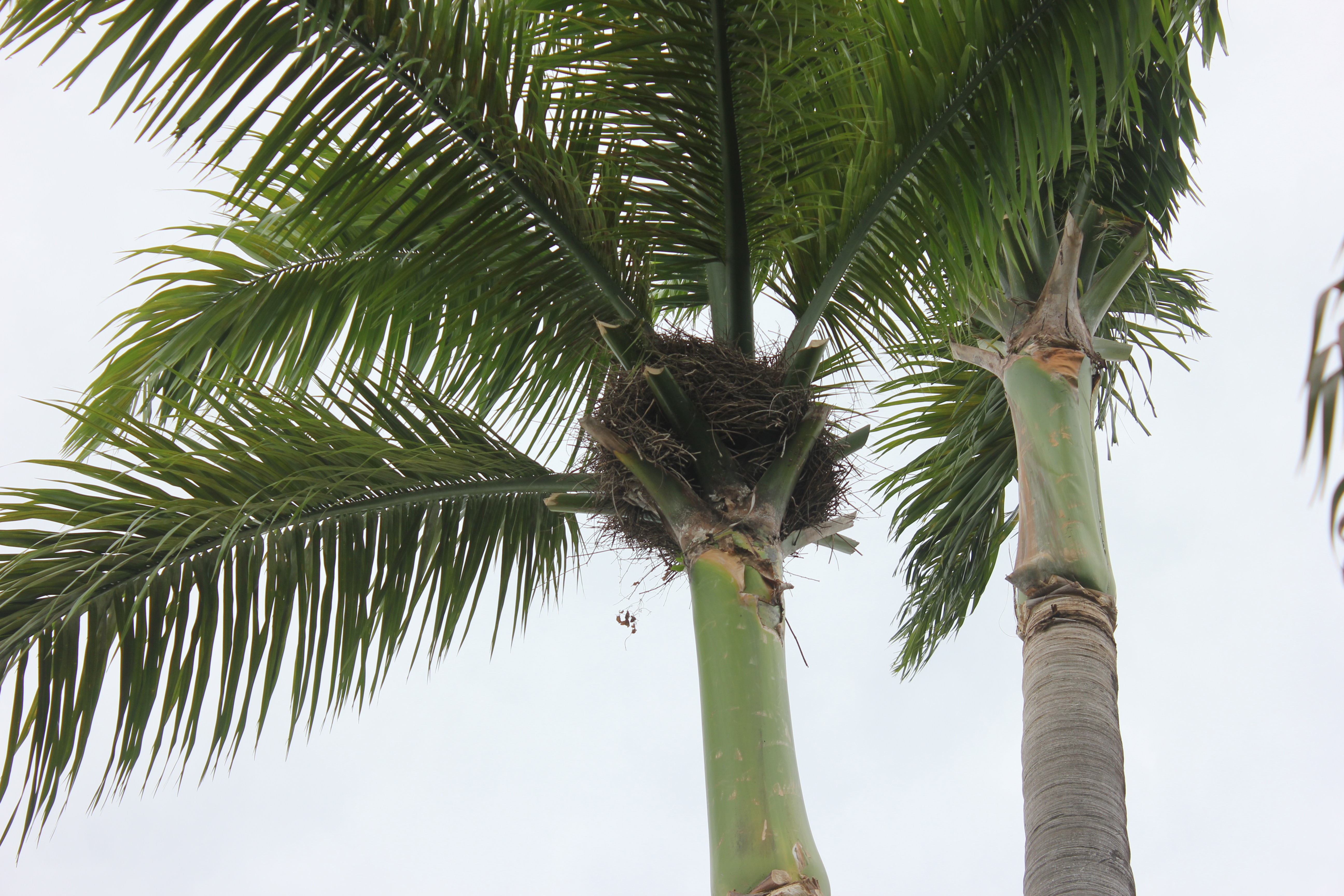 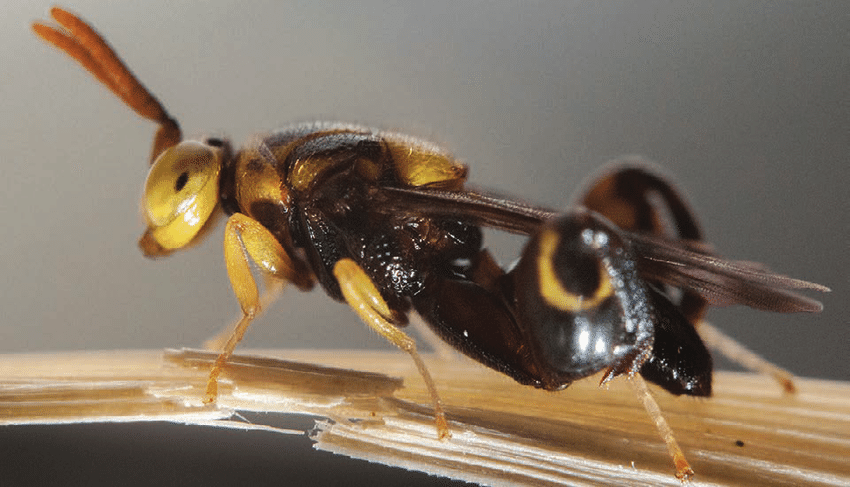 Did you know that the Cigua Palmera or palmchat (Dulus Dominicus) is the national bird of the Dominican Republic? Their nests can often be seen as quite noticeable one to two-meter bundles of twigs in the centers of the fronds high up in palm trees or on telephone poles. 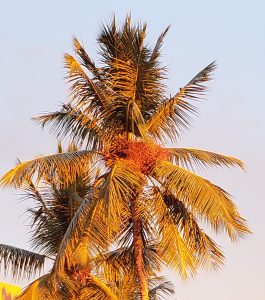 The ubiquitous 8-inch (20 cm) cheery palmchat is a very sociable, lively bird of many songs and enthusiastic sounds. With their gregarious spirited antics, they have provided many hours of fascinating entertainment for us as we watched them dance, scuffle, and bounce from frond to frond, navigating the swirling winds and then landing as if they were their own private shimmering green, rustling landing pads in the distant palms.

Palmchats gather in small groups and share large communal nests which house anywhere from two to eight chambers – one for each pair and their offspring.

The species is unique to the island of Hispaniola, including the adjacent Saona and Gonâve Islands, where it is common and widespread. It inhabits areas from sea-level to 1500 m (5000 ft) where palm savannas can be found, or other open areas with scattered trees. Where its food trees are present, it has adapted well to city parks and gardens. 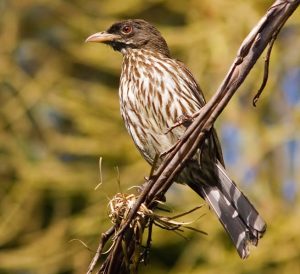 The other day as we sat working on our balcony enjoying the cooling, refreshing trade winds in the perfect weather splendor that is the DR in early spring, we saw a gardener climbing the palm trees. He was trimming the lower fronds and coconuts presumably so they wouldn’t fall on any of the complex’s less aware or observant residents’ heads. That was fine enough, I guess. The trees look a little sparse and weird until they grow out again and a coconut tree without coconuts is just a palm tree—not that that is at all bad either.

But then he started tearing through the nests of the palmchats, scattering fledglings, babies, and any eggs there may have been to the winds and a forty-plus foot drop. We yelled out for him to stop, but our shouts fell on deaf ears. So we ran to the office and asked the manager to have it stopped. The manager was a bit surprised that anyone would care so much about bird nests and explained that someone had complained about the danger of falling coconuts and palm fronds. I don’t know, but complaining about palm trees and coconuts on a tropical island is akin to traveling to the Antarctic and complaining about ice and snow.

Due to its positioning above the coconuts and lower fronds it is totally unnecessary to move the nests to trim the tree. It just looks tidier and cleaner to clear the nests out. To the casual observer the nests just look like an odd part of the tree one just hadn’t noticed before. 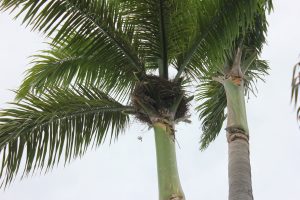 We did manage to save a few nests, but the fledglings that fell out of the nests that were destroyed were doomed. We noticed with all due appropriate horror and disgust that the flightless fledglings had large fly larvae embedded in their wings and legs. I did some study and found that these larvae were from the Philornis downsi fly originally found in Trinidad and Brazil. Although the adult fly feeds on fruit – its offspring feed on baby birds.

These flies somehow made their way to the Galapagos Islands where they are now threatening to wipe out twenty species of local birds as there are no natural predators of the larvae. In the wonderful irony of nature’s ways, it turns out that the parasite has a parasite. Scientists are looking into the possibility of using a special wasp named Conura annulifera that preys on Philornis downsi fly larvae but there are many impact studies still needed before that can happen. 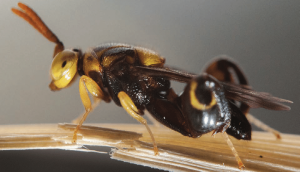 I don’t know what sort of threat the palmchat faces besides humans tearing down their nests, cats, dogs, and any other natural predators, but when we took the fledgling to the veterinarian they filmed the removal of the larvae and the insect itself. This could have been the first observation of Philornis downsi infestation in the DR. It’s certainly the first observation of the phenomenon on the north coast.

With any luck, the Philornis downsi larvae will have a predator here in the DR, otherwise several species of Dominican birds may also be in danger of extinction.

As with all animals, the palmchat serves an important function in its environment. And here in the ecological chain of Hispaniola the palmchat is important for the broadcasting and spreading of fruits and the control of insects and plant pests.

So far the palmchat is not endangered. But if you see someone tearing down or about to tear down a palmchat nest, you may wish to ask them please not to: the island will thank you.