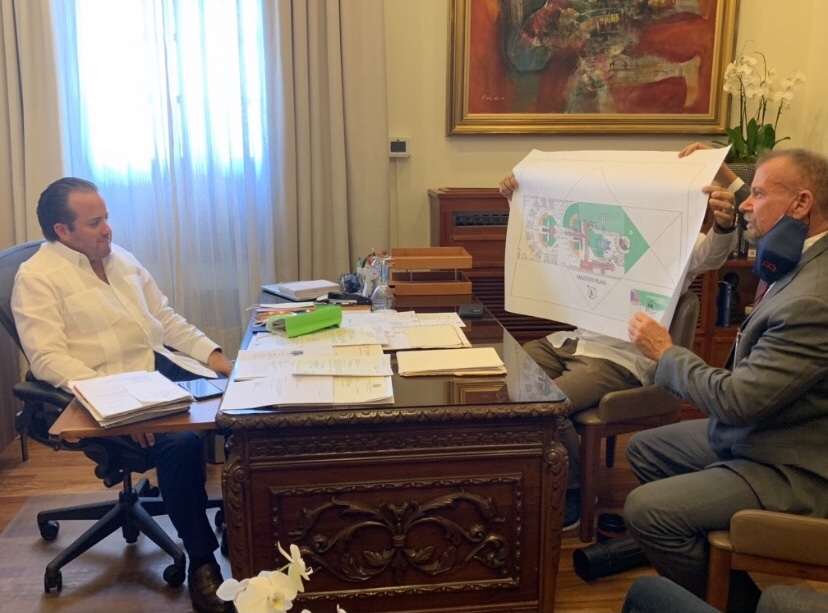 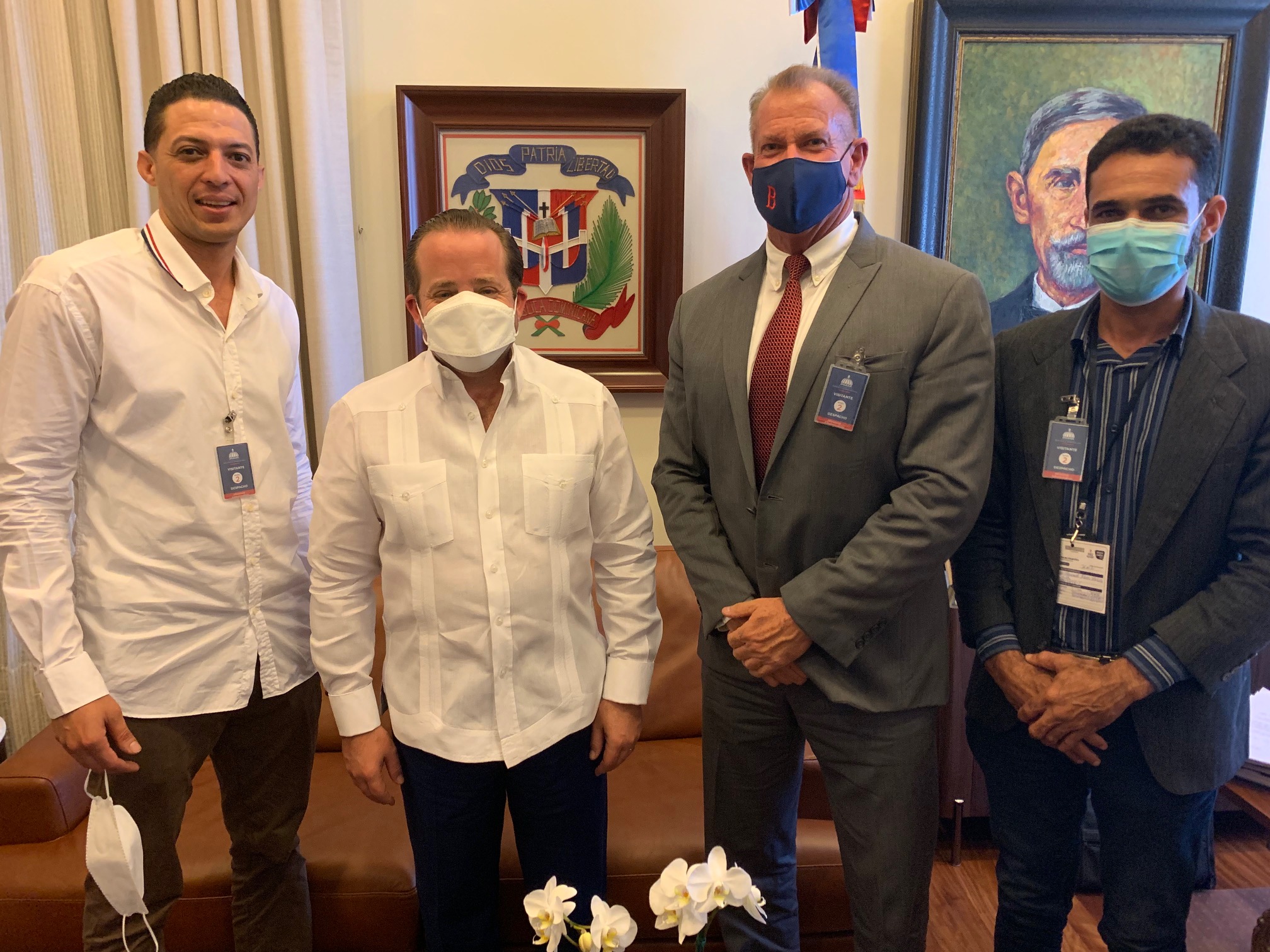 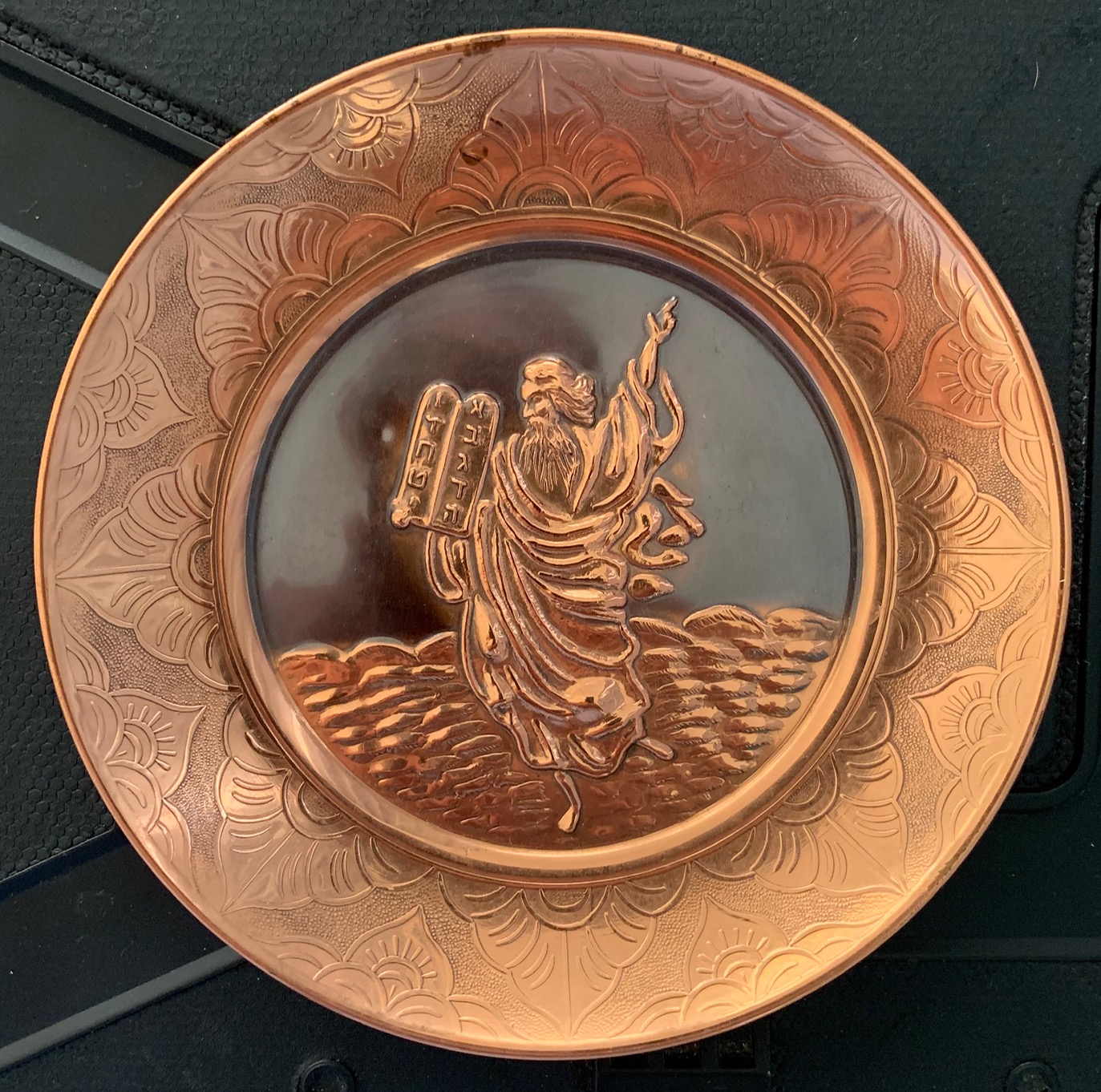 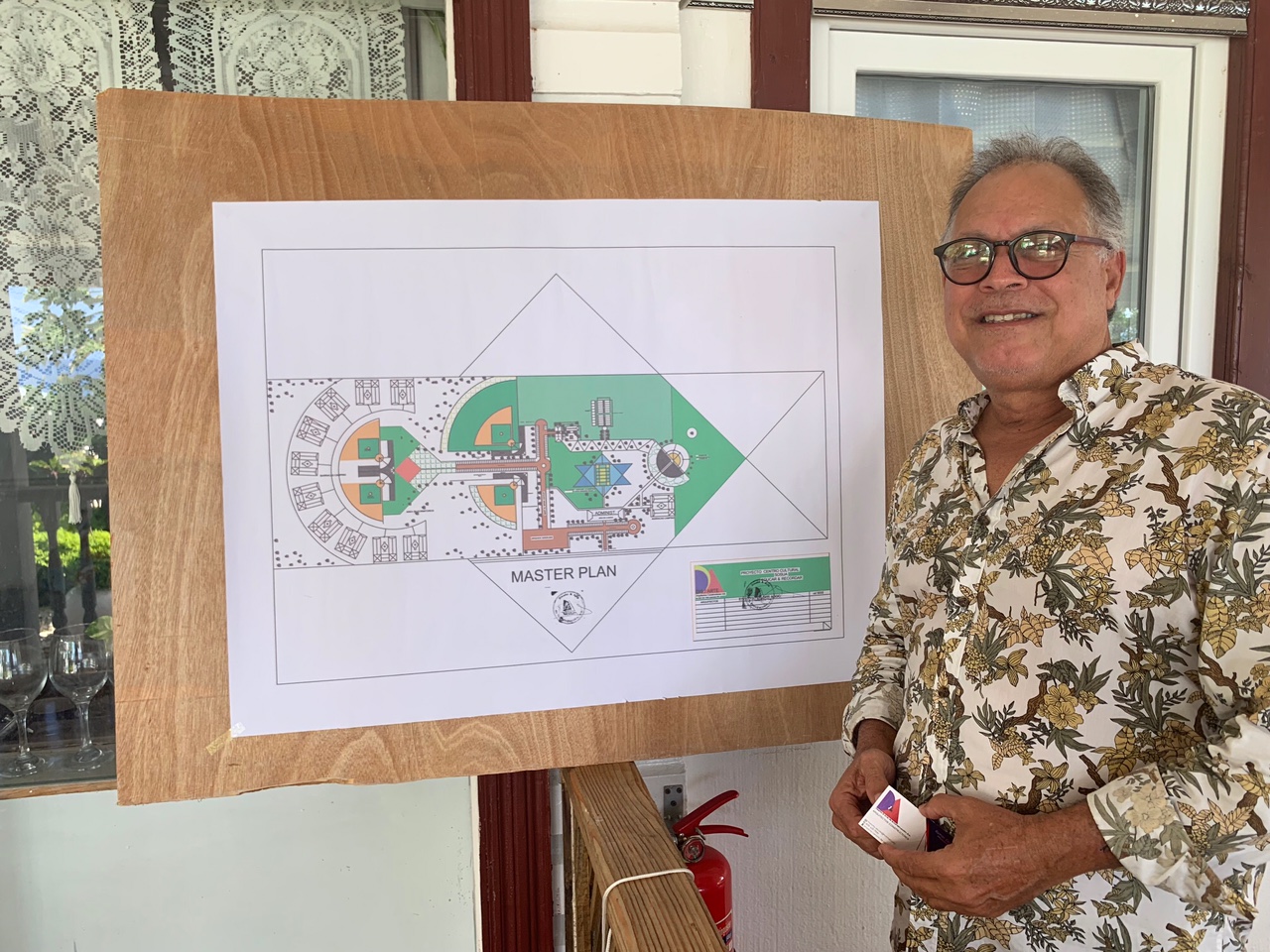 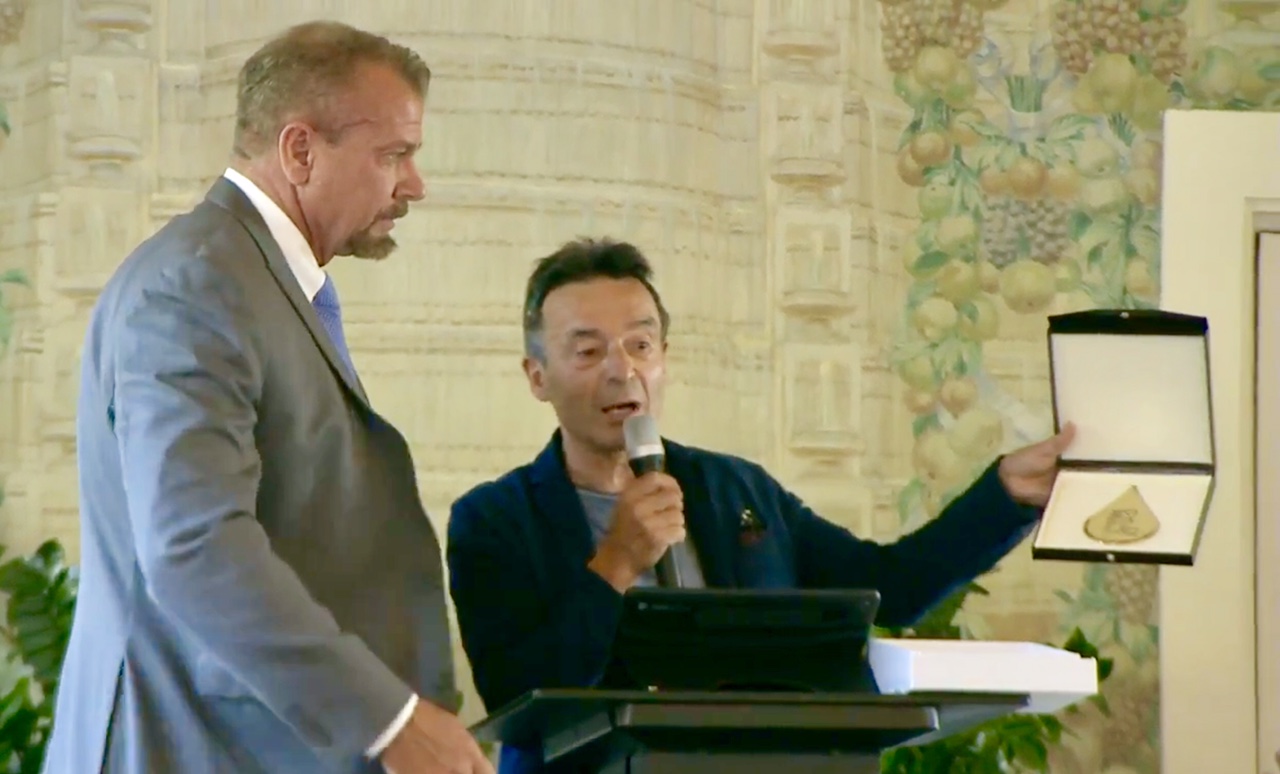 Last Monday a meeting was convened at the Presidential Palace in Santo Domingo between José Ignacio Paliza, Administrative Minister to President Abinader, and Elihu Baver, Board Chairman of Sosua75. Also attending the meeting were Jhonattan González, Ramón Leonardy Abreu the Director of AltaVision canal 20 both from Gaspar Hernandez and Hernán Santos Lugo, Palace Employee and family friend of Baver from Santo Domingo. 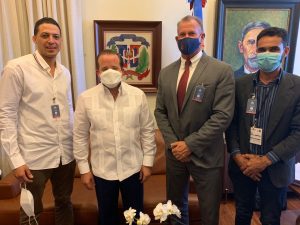 The meeting commenced with Baver presenting a gift on behalf of the European Jewish community of a copper plate embossed with the figure of Moses holding the ten commandments. The gift was given in thanks to the Dominican government for being the only country at the 1938 Evian Conference to open its doors as a haven to fleeing Jewish refugees at the beginning of WWII. 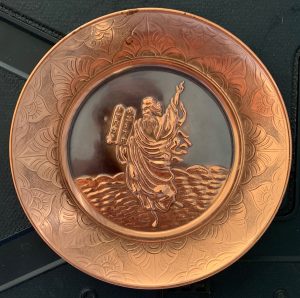 Gift of copper embossed plate with Moses figure holding the ten commandants given by European Jewish Community and presented to Paliza in honor of The Dominican Republic being the only country at the 1938 Evian Conference.

The specific intent of the meeting was to plant the seeds and convey the plan of the Jewish Dominican Cultural Education Center project vision, which Baver first conceived seven years ago after forming Sosua75, a US 501(c)3 Non-Profit Organization based out of the Boston area.

In addition to showcasing the overall unique aspects of the Dominican Republic, the overarching mission of the Cultural Education Center project is to highlight the many synergies of the Jewish and Dominican cultures since their integration in the 1800s, which then led up to the 1940 establishment of Sosua as a refugee colony following Evian.

Formally petitioning the Dominican government to be a collaborative partner with Sosua75 and US investors backing this project, Baver asked Paliza if the government would supply a suitably sized parcel of land near the Puerto Plata airport for the specific purpose of constructing the multi-faceted sports, history, education, and entertainment complex.

Baver envisions this project as a practical role model illuminating collaboration between the Dominican Ministries of Education, Sports, Culture, Agriculture, and Business. After construction, the hope is for large Dominican businesses, corporations, and organizations to sustain the project’s operations.

Potentially employing hundreds in its construction, on-going maintenance, and staffing, the building of the Center could bring a considerable boost to the North Coast economy for generations to come as well as attract thousands of new international tourists to the North Coast, interested in not only the beautiful beaches and environment but “Heritage tourism” the unique history and culture of the region as well.

Designed with a consistent white Victorian architectural styled theme and showcasing the latest developments in technical innovation, slated key elements of the new proposed Center include a major educational facility to accommodate University exchange students and study abroad programs, a self-sustaining cooperative organic community farm, outdoor amphitheater for concerts, theatre, and other events, a butterfly conservatory honoring the life and legacy of “Las Hermanas Mirabal” (the Mirabal Sisters), a Santiago based Centro Leon-like feel with smaller museums dedicated to sugar cane, tobacco, coffee, and the indigenous Taino Indian culture, expansive gardens where native species of plants will be cultivated, and a world-class agricultural research and development facility. 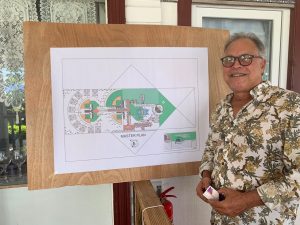 Sosua Registered Architect Ramón “Monchy” Escoto standing in front of the design he worked on for Baver.

Representing this country’s national pastime, a large baseball stadium and training complex is planned for players of all ages and to host international baseball tournaments and exhibitions, including housing accommodations for both the players and their families.

An ideal complement to the recent announcement by the Tourism Ministry to focus their 2021/22 tourism campaign based on the historical establishment of the Sosua Jewish refugee colony back in 1940, Baver is a noted subject matter expert on the 1938 Evian Conference to Sosua journey.

In addition to being a keynote speaker at the multiple US and international conferences and events, author &/or subject of over 50 newspaper articles, radio, and TV shows, and documentaries in 2018, Baver was awarded the “Gold Key to the City” of Evian France and currently is enrolled in the prestigious Yeshiva University in Washington Heights/ NYC as a Master of Art’s degree candidate in Holocaust and Genocide Studies. 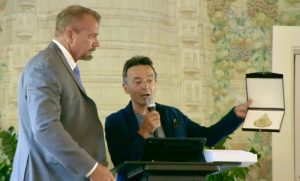 The desired location for the Cultural Education Center is in or near Paliza’s hometown of Puerto Plata, somewhere off the main road near the airport. With the overall objective of attracting international family-friendly tourism to the North Coast based on its rich history, Baver’s vision is for the North Coast to be the epicenter of Education, History, Culture, Agriculture, and Sports in the Caribbean.

Paliza requested additional information be made available to him and his partners, and an upcoming follow-up meeting is being planned.”

Excellent initiative, such a project is well needed to keep Sosua’s history alive and available to the world.
Also it’s a great idea to make an all inclusive project, projecting all cultural elements of the country as well.

Sosua75 Project is a winner! It represents a wonderful expression of the regions Past, intimately involving people in the Present, and providing for a brighter Future! Kudos to Mr. Hugh Baver!