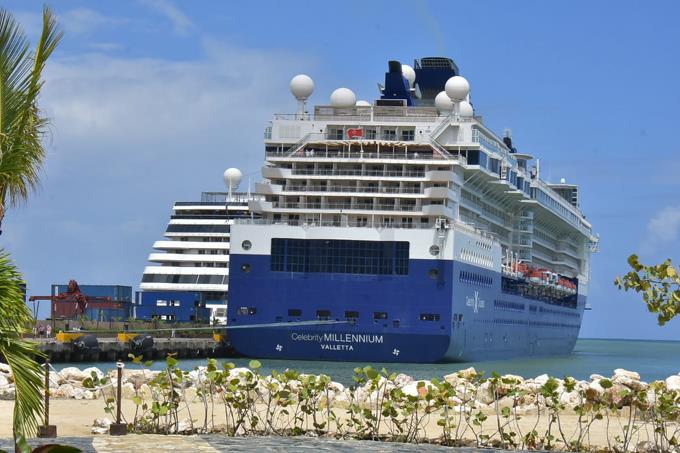 Some seven tourist boats brought around 11,700 foreign tourists to the Amber Cove and Taíno Bay ports of Puerto Plata, according to information provided by the Ministry of Tourism (Mitur).

In addition to the number of crew members traveling onboard these ocean liners, the total number of cruise passengers in the seven touches amounted to 18,667 visitors, according to figures provided to Mitur by both tourist ports.

At the Amber Cove terminal, on Wednesday of this week, the ships Nieuw Statendam with 1,082 passengers and 843 crew members and Regal Princess with 2,632 tourists and 1,217 crew members touched in the morning hours.

That same day, Taíno Bay received the Celebrity Millennium on its shores with 950 visitors on board with 772 service members, and minutes later, the modern and welcoming Seven Seas Splendor arrived with 552 passengers 553 crew members.

The next day, three more ships arrived at both ports; the immense Carnival Magic brought 3,653 tourists and 1,232 crew members coming through Amber Cove. In contrast, the MSC Seashore brought down 1,763 foreigners, and the Norwegian Dawn brought 1,068 cruise passengers on routes from Florida and other US coastal destinations.

For her part, the provincial director of the Ministry of Tourism in Puerto Plata, Stephanie Kfouri, said that the arrival of these tourists “has been a new hope for Puerto Plata.”

He also stated that taking advantage of the time of the Puerto Plata carnival, thousands of visitors who arrive on cruise ships have danced with joy and lived closely the culture and traditions exhibited in the first version of POP Cultural Fest.

“This cultural and artistic project is organized by the Ministry of Tourism in alliance with the Tourism Cluster of the province, with the support of the Mayor’s Office, the Governor’s Office and the Directorate of Culture, carried out in the Plaza Independencia (Central Park) of the municipality San Felipe,” read part of the statement of the entity mentioned above.

Cultural Fest POP, which continues until March 20, serves as a stage for artists, painters, cultural groups, and carnival characters from Puerto Plata to show their creations, carried out with the aim of boosting tourism and active community integration.